History of st Rita's parish from the book This very stones cry out.

Many interesting events make up the history of the lovely Saint Rita Church high on a hill overlooking the village of Maple City.

In the year 1873, Catholics of this small community were served by Reverend Zorn and later by the Reverend Mrak, who in time was elevated to bishop.

Sometime before 1884, a group of Bohemian Catholics had come to Cleveland Townshipand settled in what is now called "the Bohemian Settlement," where in 1884 they built a church and Father Mrak became pastor.

Father Bieniawski of Isadore, at present in charge of the church in Mackinaw City, was then appointed to take over the Bohemian Settlement and Empire churches as his missions, and he said Mass once a month in each of these churches.

In 1901 David A. Clavette and Charles Bloom of Ludington moved their families to Maple City where they had purchased the Stanley and Young General Store. The Clavette family were Catholics and became interested in bringing Holy Mass directly to their little community. In 1914, Matthew Sullivan, son of the pioneer settler, and Dave Clavette went to Grand Rapids where they beseeched Bishop Gallagher to allow them the privilege of having Mass at least once a month in their village. The Clavette family were then proprietors of the Hotel DeClavette and arrangements were completed whereby a small altar was to be erected in the hotel for Mass to be celebrated once a month by Father Flajole, pastor of Saint Ann Church in Frankfort. He also acquired the Bohemian Churchas one of his missions.

It soon became apparent that a larger place was needed to accommodate the many, Catholics attending the monthly services. The group rented a large room in the Bellinger building across the street from the hotel. Once again Matthew Sullivan, Dave Clavette. and another enthusiast, Stanley Peplinski, journeyed toGrand Rapidsto request permission of Bishop Gallagher to allow them to purchase the property. The Bishop assured them he would "look into the matter."

Upon their return toMapleCitya Novena was made to Saint Rita asking her to assist them in their prayers asking God for this great favor. Before the close of the Novena, Father Flajole received word to proceed with the purchase and to make necessary alterations.

It was at one of their frequent planning meetings that Mrs. Clavette suggested that their church be called Saint Rita in thanksgiving for the many favors they had received through her intercession. There was justifiable pride by all when Mass was offered for the first time at Saint Rita in 1914. 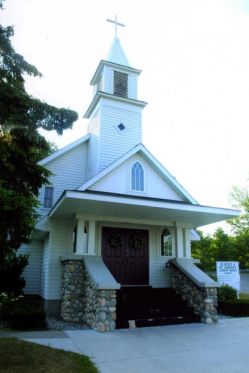 Saint Rita's history would not be complete without the story of the religious education of the children of the community. Classes were held three times a week, and on September 8, 1918, the momentous day arrived when 24 children received their First Holy Communion.

This was just the beginning of the religious education of the children. In 1920, Father Albert Bauman requested permission to have the Sisters of Mercy send four nuns for the duration of six or eight weeks during the summer vacation to teach catechism to another First Communion class; and to confer the Sacrament of Confirmation, another first for the parish. His request was granted and two nuns were sent to teach in Maple City, and two in Empire.

Saint Rita was served as a mission church from Frankfort by Father Flajole from 1914 to 1919; Father Albert Bauman from 1919 to 1924; Father Roman Kosnik from 1924 until it was made a mission of Empire with Father Bocek on August 1, 1951. He was authorized to build a rectory next to the church in Maple City. He resided in Cedar until the parish house was ready for occupancy in January 1952. Father Sniegowski was pastor until April 6, 1953, when Father Joseph Wiekierak was placed in charge. On July 1, 1955, another change was made when Father Wiekierak was transferred to Kalkaska and was succeeded again by Father Sniegowski, who had been pastor of White Cloud.

In the fall of 1958 Father John Najdowski became the pastor, and remained at Saint Rita/Saint Joseph until Father Stanislaus Bur came in the summer of 1960. A parish hall was constructed during Father Bur's pastorate; and Saint Rita and Saint Joseph parishes merged. Former pastor of Saint Jean Baptiste Parish,Muskegon, Monsignor William Frazier, arrived in the summer of 1970 to become pastor of Saint Rita/Saint Joseph Parish. During this time, these parishes became a part of the new Diocese of Gaylord.

Father G. Wm. Fischer served from 1974-76, fol­lowed by Father Martin J. Toolis from 1976-78. Father Toolis directed the renovation of Saint Ritas Church. Fa­ther Arthur Mulka served temporarily from October 1976 to February 1977 with Father Ron Gronowski, while they were pastors of Holy Rosary church at Cedar. Father David A. Romzek served from 1978-82 and Father Casimir J. Zawacki from 1982 to August 1984. During his stay, an addition to the parish hall was realized.

Father James A. Holtz was assigned to Holy Rosary Church in Cedar in August 1984 as well as the co-parish of Saint Rita/Saint Joseph. Since the merger of the three parishes, the community has grown under the spiritual guidance of Father Albin J. Gietzen who arrived in August 1985, followed by Father Charles Zeeb in August 1993; Father Martin Schaub from August 1995-October 1996: and Father Edward Boucher from November 1996 until the present.