St Joseph church is located at 5899 S Bohemian Rd, Maple City, MI 49664. There are scheduled only two masses a year: on May 1st (Feast of st Joseph the Worker) and October . The October mass is celebrated in Extraordinary form. Beside that there are usually  several weddings throughout  the year.

St Joseph is an old Church built by Bohemian immigrants in 1884. According to Wikipedia (see whole article which briefly describes history) It was constructed in 1884 and listed on the National Register of Historic Places in 1992. Recently we have painted the outside of the building (see the pictures), it was amazing how many people have showed for this wonderful work. Also near the church is a Cemetery (See the pictures). 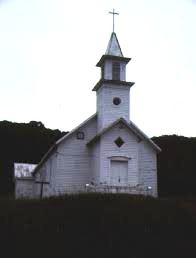 St. Joseph's was constructed in 1884 by Bohemian settlers in Cleveland Township, Leelanau County and is significant as the only church associated with a Bohemian community known as the Bohemian Settlement. Additionally, it is one of only a few surviving Catholic mission churches associated with Father Ignatius Mrak, an early Catholic missionary. Finally, the church was and still is the only church building in the relatively unpopulated, rural township. St. Joseph served its Bohemian Catholic congregation until 1970 when the parish was merged with a neighboring one and regular services in this building discontinued.